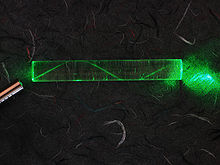 In order to transmit a signal, we need lots of fibers that, together with a protective tube, form a cable. The distribution of fibers inside the cable may be square or hexagonal. At the Faculty of Physics we studied a hexagonal distribution that we observed with a microscope: it looks like a honeycomb!

So, onwards to the results! Again using a microscope, I measured the diameter of separate fibers and the average is 24 µm. For comparison, a human hair’s minimum width is 17 µm. 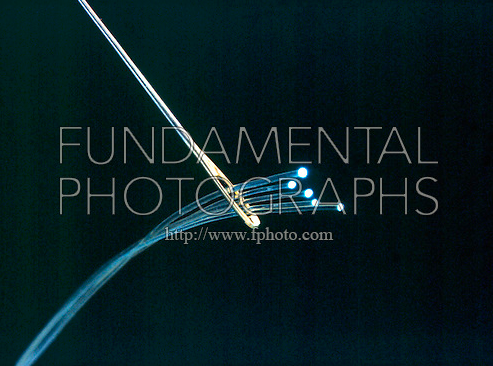 The diameter of the whole cable turned out to be 3.1 mm and knowing the distribution, we can estimate the cable contains around 14 000 fibers.

Another important feature is the angular aperture of the cable. To measure it, one end of the cable was connected to a power meter and the other end was placed on a special rotating table with a scale. Next, a laser beam was aimed directly at the front surface of the cable and the power was recorded. Then the table was rotated and for every 3 degrees away from the center the power of the transmitted laser radiation was recorded. These are the results, neatly plotted: 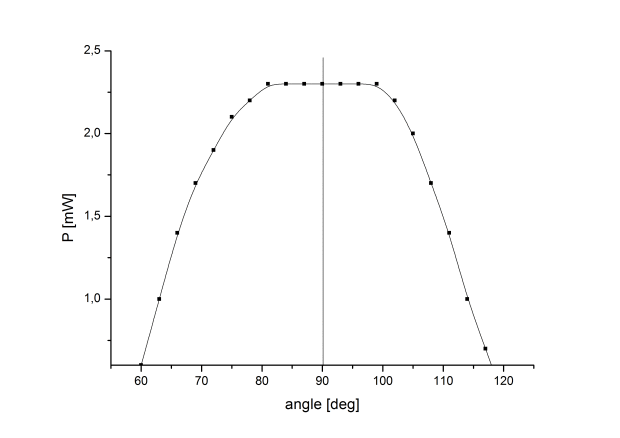 It is observed that around 10 degrees away from the central position (in each direction), the performance is pretty much the same. Further to the left/right, power drastically decreases.

Finally, a few words about the optical resolution of the cable. It is practically a raster optical system as each fiber transmits a certain part of the image, resulting in a grain structure, so the resolution depends on the diameter of the fibers. My estimate using an optical resolution test chart is 21 lines per mm. Is that enough? Well, considering the applications, maybe! Comparing it with the resolution of a typical diffraction grating though, it’s almost nothing. I will further explore this topic when I have the time.