As a person who never really used any of the major social networks, I’m probably the wrong one to judge them. It has been done to death anyway. Mind you, I am not a total privacy freak either—I enjoy communicating online, especially in emails, forums and blogs. Then where does my aversion to the big social networks come from? After all, forums were (are) also notorious for toxic discussions, off-topic banters and proliferation of junk content.

Perhaps this degradation of discourse is an intrinsic property of the human crowd. Maybe we are just bound to be this way, no matter the medium (just imagine the gossip and boastful displays of ignorance in a medieval tavern). Still, I would argue there is a difference between the technologies we use for communication in the ways in which they suppress or enhance human crowd behaviour. We can design a platform to be free, open, inclusive, independent, encouraging the same qualities in its members. Or we can make it closed, dividing, isolating, mercantile.

Communication technologies pose a unique problem. While for most other products and services you could in principle make your own choices, a network by definition contains more than one participant. As is popularly stated, the value of a (social) network is proportional to the square of its members (Metcalfe’s Law). If you want to talk to certain people, you go to where they are. And if you want to talk to everyone, you go to where everyone is—no matter the quality and values of the platform.

As a result, in order to change the platform you use to connect with people, you have to make those people change, too. And good luck with that. Most people don’t care about the same things you do, be it privacy, freedom, honesty, or other lonely words. Even if they do care, they don’t necessarily see the connection between these abstract moral values and the day-to-day apps and websites which provide convenience for a hidden cost. Or they face the same problem as you, dear revolutionary: they need to convince a bunch of people to make the change as well. In the end, nobody bothers to do anything. Even you give up, after your new sports team or the colleagues at your new job invite you to a group in the same old unethical, closed platform.

Why are we stuck? What can we do? Install all the apps? Well, using several different channels to connect with different groups of people seems like a good start. Merging all public, private, work and leisure aspects of your life into one big, messy cauldron (that also records and sells its contents to third parties) sounds like a bad idea to begin with. But there must be something better, right?

What if we designed the communication protocol to be open, secure and bridgable from the start? Kind of like… Matrix? I am hosting a Synapse server for my family and we chat using Riot (now Element) as a web and mobile client. It works like a charm, for the most part. They love it. For the first time my father (who is otherwise paranoid and quite the opposite of a tech geek) also joined a chat group. I even tried the Slack bridge with a friend and it worked, though we abandoned it because she was only using Slack for this one university group. The WhatsApp bridge would probably be a game changer—too bad I couldn’t set it up. 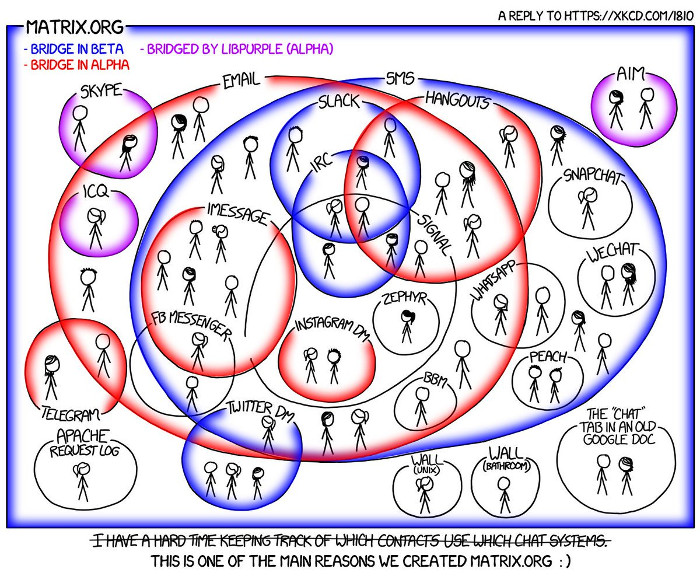 Point is: there are great alternatives, as can be seen from this comparative spreadsheet. But how do you make people jump to your server? What’s in it for them, if most of their contacts are elsewhere? Bridges are a big selling point, however they’re just emerging and lack the robustness and convenience necessary for a mainstream tool in 2019. Furthermore, seamless bridging with the most popular networks might only be possible with said networks’ cooperation, which seems unlikely to happen.

I remain hopeful. Don’t know for how long will I keep on giving my privacy sermons (friendships have stagnated due to more trivial things) and I’m not sure what’s the correct approach to convincing friends, colleagues or even strangers. In general I have a live and let live attitude which doesn’t help, either. If people were reading Mozilla’s blog, it might have been easier. If people cared more, the world would be a better place—such an old and simple cliché. Apparently, not giving a fuck is an art now (no, I won’t link to the book), so forgive me for imploring you to do otherwise. Come to the lonely world of privacy and start having meaningful online interactions again.

- The spirit of convivir
- Interface communication
- Minimalism? Try being poor